He was no flyboy. No Neil Armstrong. But the contribution of an obscure engineer at NASA's Jet Propulsion Laboratory may have been far more lasting. And if you’re reading this on your phone, you have it in your hands. That tiny camera sensor on the back has roots in a miniature imaging system smelted in the fires of U.S.-Soviet competition and devised by Eugene Lally for astronauts to snap pictures of the cosmos. That competition, some argue, is again needed to restart what John F. Kennedy described as “the best of our energies and skills,” not just to inspire, but to again unbridle unheard-of-technologies, such as Global Positioning Systems (GPS) and advanced solar cells, across uncharted frontiers for the betterment of society.
But hold on a moment.
This isn’t 1962. With space entrepreneurs like Elon Musk and Jeff Bezos rubbing shoulders with dozens of countries in what’s shaking out to be a new, multi-trillion-dollar free market, one power in particular is gaining ground on U.S. preeminence. Boasting more orbital launches in recent years and a historic landing on the far side of the moon, the next Neil Armstrong could be from China. But be careful with the Cold War rhetoric, some say. A new space race between great powers could unleash just the sort of military posturing for which much of the 20th century was known. Only this time, the fall-out could be far more devastating.
So, this week, we’re breaking out the moon boots to ask an essential question: “Is a U.S.-China space race good for humanity?"
Theoretical physicist Michio Kaku and space policy expert Raji Rajagopalan are set to debate live against Harvard physicist Avi Loeb and rocket scientist Bidushi Bhattacharya at 6pm ET on Wednesday, October 21st.
Make sure to register here, and we’ll save you a virtual seat. Submit your own argument here, and it’ll be integrated into the show by IBM’s Watson. The possibilities are limitless. The character count is not -- 36 words or less.
Also, coming up this week is a deep dive into the merits of Supreme Court nominee, Amy Coney Barrett, and what the future of the nine-justice court may hold… especially if it ends up being more than nine...
As always, let us know what you think.
P.S. -  Sign up here to find us in your inbox each week.  And if you like what you read, consider sharing this blog post with a friend here. You can always reach us at info@iq2us.org with ideas and feedback.

POINT / COUNTERPOINT
Two perspectives on one of the nation's biggest debates this week.
Can the U.S. Compete with China in a New Space Race

As China launches BeiDou, a new navigation satellite system intended to rival U.S.-based GPS technology, we ask: Can the U.S. prevent China from closing the gap in a new space race?
YES:
The Dragon Is Breathing Down Our Neck: Action Is America’s Best Weapon
“For America to win the new space race, it must reward industry for producing and deploying systems rather than more stacks of paper. When building and fielding is rewarded, even more of America’s new innovators will join the space industry.”
- Forbes
NO:
The new space race pits the U.S. against China. The U.S. is losing badly.
“China is best placed to win a space race, given its well-coordinated, disciplined, technocratic system, able to set and maintain long-term goals, with a vast population and talent base.”
- The Washington Post

Since the Soviet Union’s Sputnik launch in 1957, nations and private companies have jockeyed for their spot in the sky. Have a look at the evolution of launches by nations over time. 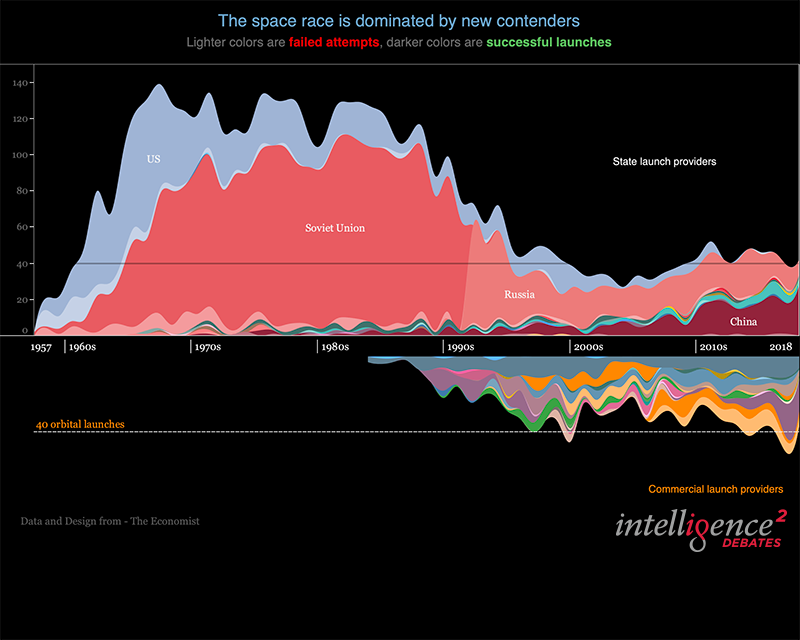 2,787
The total number of satellites currently in orbit around Earth

When you withdraw money, navigate with your phone, or check your weather app – you have a satellite to thank. But just this week, two major pieces of space debris narrowly missed collision. Meanwhile, countries and private companies alike are launching even more satellites into lower orbit. How much space is there ... really ... left in space?
Space is becoming too crowded, Rocket Lab CEO warns
“[Space] junk is practically impossible to clean up on a large scale. […] The odds of avoiding disaster only become slimmer with each new satellite launch.”
– CNN
The pandemic is speeding up the space internet race
“Never before have we depended so much on connectivity. We might just have to leave planet Earth to get it.”
– Vox

- Meanwhile, Jamelle Bouie warns that if Republicans are successful in confirming Barrett, then Democrats should retaliate with court packing. [Read more via New York Times, Jamelle's debate on the Electoral College.]

- Peter Singer offers three criteria for leaders to decide whether to impose lockdowns to slow the spread of COVID-19. [Read more via Project Syndicate, Peter's debate on Assisted Suicide.]

- What is the role of museums to showcase work that challenges racial injustice? Jerry Saltz dives in. [Read more via Vulture, Jerry's debate on the art market.]

We hope you will join us and continue to uphold the standard of public discourse. If you believe in informed, substantive and civil debate, please consider sharing our newsletter with a friend, follow us on Twitter or Instagram, and consider donating – whatever you can – to help keep this work going.
Science
Image: