Monday, September 28, 2020
Justice Ruth Bader Ginsburg’s death sent shockwaves around the nation. This week, we look at the unfolding debates around the Supreme Court, the legal system, and the looming election. Let’s dive in:

Here’s what we have in store:
- That's Debatable: Should the Senate Fill the Vacant Supreme Court Seat?
- Intelligraphic: Sizing Up the Bench
- Double Digits: 2%
- Points of View: Insights and analysis from past debaters

Sign up here to find us in your inbox each week and if you like what you read, consider sharing our newsletter with a friend here. You can always reach us at info@iq2us.org with ideas and feedback.

THAT'S DEBATABLE
Two perspectives on one of the nation's biggest debates this week.
Should the Senate Fill the Supreme Court Vacancy?

It’s the question that will shape American law for decades to come: Who should be the next Supreme Court justice? With only weeks until the 2020 election, some argue that lawmakers should follow the precedent set in 2016 and wait to hold nomination hearings. Rushing through a contentious confirmation process, they say, would only deepen partisan divisions, call the legitimacy of the court into question, and threaten confidence in our democracy. But others say the Senate has a constitutional obligation to consider judicial nominees and that, given the possibility of a contested election, the Supreme Court must have a full bench to avoid a possible 4-4 split decision on cases involving voting. Should the current Senate confirm a new justice now?
For: The Battle Over Ginsburg's Seat Is Set to Be All About Raw Power. But There's Still a Way to Show Principles Matter
“Now is the time for true statesmen to step forward, to put prudence before power, and reach a compromise that doesn’t just preserve the legitimacy of the court, it helps preserve the integrity of our republic.”
- Time | David French

Against: Confirm Trump’s Supreme Court Nominee—Don’t Give In to Threats, Senators
“There’s ample reason to be concerned that we might find ourselves in another Bush v. Gore scenario, where the nation’s highest court needs to settle decisions regarding the next presidential election.”
- Heritage Foundation | Kay Cole James

How many justices sit on the Supreme Court? Since 1869, the number has stayed steady at nine. But before that, Congress often changed the size of the court for its own political aims. Should lawmakers consider expanding the bench once again?
Is it time to reevaluate the number of Supreme Justices? 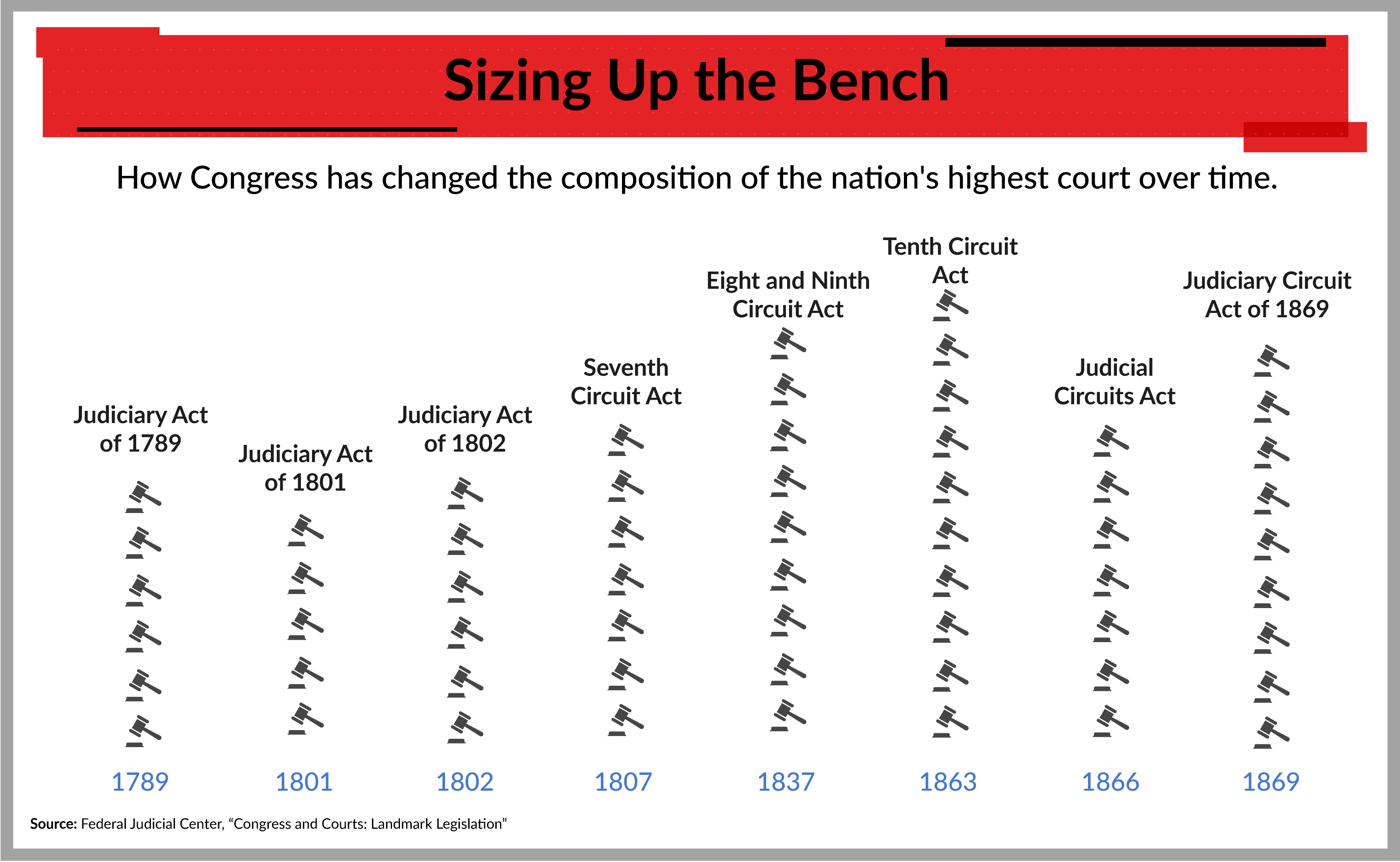 2%
The percent of federal criminal defendants who go to trial.

Most federal criminal defendants – some 90 percent – plead guilty rather than going to trial in 2018, with the remaining 8 percent having their cases dismissed. What does this say about the criminal justice system today? Do prosecutors abuse their power through excessive plea bargaining? Or is this an efficient and effective means of ensuring justice?
Revisit our debate on the motion “U.S. Prosecutors Have Too Much Power”

Next week, we’ll host an evening of debate on the topic of police reform. John Donvan joins five esteemed guests to debate police unions, training standards, and calls to “defund” police in America. Get a sneak preview of our debaters’ arguments here and tune in next Wednesday evening to watch the full debate premiere.

- Paul Butler argues that the FOP, the nation’s largest police organization, should be relegated to the dustbin of history. [Read more via the Nation]

- Jason Johnson says that police critics and supporters can find common ground on at least one thing: the police have too many duties. [Read more via USA Today]

-  Sherrif Sue Rahr seeks to reimagine the way police do their jobs. [Read more via Time]